Home > Blog > Everything You Need to Know about Angular Development

Everything You Need to Know about Angular Development

When you want to launch your software product, one of the core things you should decide about is the technology stack you will rely on. And if you are going to build a web app, it is crucial to find the most suitable framework. Unfortunately, given the variety of options available today, it is rather easy to get fully confused. But do not worry, we’d like to help you! In this blog post, we are going to explain the peculiarities of Angular web development, the benefits of this framework, and the situations when it will be sensible to choose it. Sounds interesting? Then continue reading our article!

Before diving deep into detail, let’s start with a general definition.

Angular is a framework for web development. It is based on the TypeScript programming language. The Angular Team manages the framework at Google and the community that unites individuals and corporations. Angular appeared due to rewriting AngularJS, which was based on JavaScript.

Talking about the Angular features that are usually warmly welcomed among developers, we need to mention its support of cross-platforming. It allows for building progressive web apps, native apps, and desktop solutions for Mac, Windows, and Linux.

Angular has command-line tools. It can quickly create UI templates, turn developers’ templates into code, and provide the possibility to conduct unit-testing easily. And that’s only a small part of those features that facilitate the work of developers. We will analyze some of them in more detail when we turn to the benefits of this framework.

Angular is one of the parts of a MEAN stack. Angular is namely the “A” letter in “MEAN” as it is an abbreviation of the names of four technologies:

This set is intended for full-stack web development, and it has a lot of important benefits. First of all, it is free and simple to use. Second, it helps to reduce the time needed for app development. Third, you can avoid a huge part of the groundwork using it. Finally, as a result, you can get a robust and easily maintainable solution.

Want to choose MEAN stack development for your project? 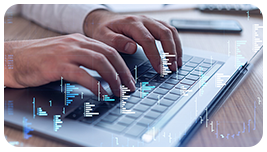 In one of our previously published blog posts, we’ve shared info about this set of technologies and how it can be used for full-stack development.

Though many developers rely on this entire stack, today, we will focus only on the Angular framework.

Today Angular is one of the most popular web frameworks among developers worldwide. With a share of over 22%, it occupies the fourth line on this list.

According to another survey conducted by Stack Overflow in 2021, 26% of 13,000 developers who were interviewed prefer Angular to other web frameworks.

As for Angular developer vacancies, there are a lot of open positions for these professionals, proving a high demand for these skills. There are over 15,500 open positions on Jooble worldwide and close to 87,000 offers on LinkedIn. Furthermore, if you turn to Github, you will see that over 2.3 million community members use Angular.

The figures are quite impressive. But what are the reasons for its popularity? Is it such a reliable and easy-to-use framework?

If one day somebody tells you that they have found a perfect technology that has completely no disadvantages, you can be sure that this person is either exaggerating or lying. But we will be honest with you. Of course, there can’t be ideal technologies, programming languages, or frameworks. However, there are cases when benefits are much weightier than all the minuses, and that’s when you need to choose this or that option.

Let’s begin with the strongest sides of Angular.

But what are the disadvantages of Angular software development?

When to choose Angular software development?

Now that we know Angular's weakest and strongest sides let’s conclude when this framework will be a good option for your project.

Given all the characteristics of Angular, it is good for complex projects, especially enterprise web solutions that require enhanced data security and protection. If you want to learn more about the peculiarities of enterprise software development, you can read one of the articles prepared by our team. Just follow the link.

To ensure that Angular is a good variant for huge and complex web products, it will be enough just to look at the list of prominent companies that rely on Angular development for their products. As we’ve mentioned above, Google is the first on this list.

Some others are PayPal, Netflix, Santander, Microsoft, Forbes, Upwork, and IBM. Quite an impressive group, right?

Our seasoned Angular developers will help transform your ideas into a real product fully tailored to your business needs.

It doesn’t matter whether you’ve already decided that you need the help of Angular developers or you still do not know what framework will be used for your project and what skills you should look for. We are ready to help you. Our experts can analyze your project and offer the most appropriate tools in your case, and thanks to our rich pool of seasoned engineers, we will be able to build for you a software product of any type and complexity.

Just share your ideas with us in our online form, and we will contact you back as soon as possible.

Angular,
Node.JS
Reasons to Choose MEAN Stack Development for Your Next Project

MEAN stack is a smart option for software development today. But why? Read...

The popularity of Angular keeps growing these days, as well as the demand...

Choosing the right tech stack for web development is one of the crucial...

DevOps
Why You Should Hire DevOps Developers for Your Project

DevOps has proven to be one of the most efficient and feasible approaches...

Want to hire a Python programmer? Read our article to learn more about...

Need to hire a developer for the project? Read our guide on hiring...